Protecting Eagles and their Habitat at UBC 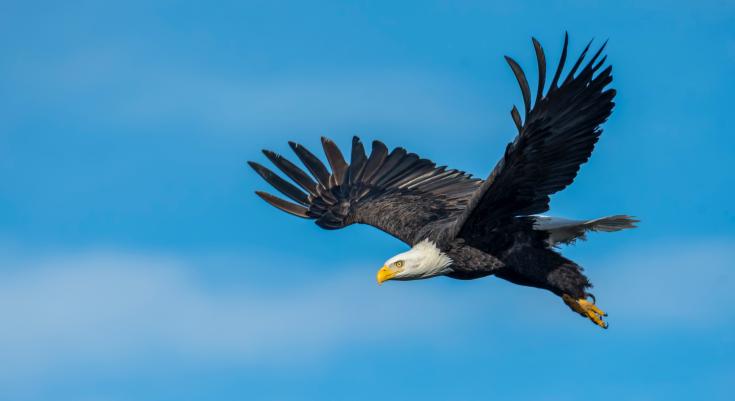 Update (September 10, 2022): in early September, the Ministry of Forests, Lands and Natural Resources issued a permit to cone the existing eagle’s nest. It is expected the cone will be installed in the next two weeks to encourage the nesting pair to use an alternate nest during construction that is close the original nest. The cone will be removed once construction is complete.

Nested atop a Douglas Fir tree in Wesbrook Village – south of the academic campus – is a pair of eagles that have captured the attention of residents in the area and the campus community. The eagles, which were first seen using the nest at Ross Drive and Birney Avenue in early 2017, appear to have recently become new parents.

Shortly after the nest was discovered to be in use, Campus and Community Planning and UBC Properties Trust worked with wildlife conservation experts to develop a Protected Species Management Plan. The plan follows provincial guidelines for raptor conservation to mitigate impacts to the eagles’ habitat as a result of new building construction.

A report summarizing the management of the habitat is available for download on the Campus and Community Planning website. A copy of the provincial permit can be found here.

While bald eagles are considered tolerant of human activity, one of the recommendations in the report was to create a buffer of undisturbed natural vegetation and minimal noise to ensure that the eagles have the best possible chance to breed. This was supported by altering the design of adjacent developments to pull the buildings further away from the protected area.

Construction of a new multi-unit residential building that is across the street from the protected area and nest is set to begin this fall. As part of the habitat management strategy, an artificial alternate nest was built for the eagles in 2021, with the intention to cone the current nest during the construction period. Conservation experts have fabricated the custom-made cone, which will be placed on the existing nest, encouraging the eagles to choose the alternate nest during the construction period.  This recommendation comes from the BC Ministry of Forests and the Hancock Wildlife Foundation, a leading conservation organization that specializes in the protection of bald eagles.  According to wildlife experts that contributed to the report, most bald eagle pairs have more than one nest and will often switch nests from year to year.

While bald eagles are considered tolerant of human activity, one of the recommendations in the report was to create a buffer of undisturbed natural vegetation and minimal noise to ensure that the eagles have the best possible chance to breed. This was supported by altering the design of adjacent developments to pull the buildings further away from the protected area.

Timing is key when it comes to coning a nest. Mature eagles typically fly north at the end of the breeding season, to feed on spawning salmon, while the young are left on their own. At between 10-12 weeks, the young start to learn how to fly. Shortly after that, they leave their nest. The current nest will not be coned until after the eaglet fledges.

Once the construction is complete, the cone will be removed and the eagles may choose to use either nest in future nesting seasons. The nest will continue to be monitored until it is clear the nest has been vacated.

Development in this area is guided by the Wesbrook Neighborhood Plan, which includes an environmental assessment that has helped shape new development in the neighborhood. Campus and Community Planning will continue to work with consulting biologists and the BC Ministry of Forests to mitigate any impact to wildlife habitat, which plays an integral role in shaping our unique urban environment at UBC.