Despite our best efforts, sometimes removing trees is unavoidable. To remove a tree at UBC you need an approved tree removal permit. UBC tree removal application processes are similar to the practices undertaken in municipalities.

The notices are in chronological order for the current year. Please see the Archive page for previous years.

Two coniferous trees - one western red cedar (Thuja plicata) and another unidentified tree - have died within the Rhododendron Wood. The trees are decaying and pose a potential risk. The trees will be left as wildlife stumps where it is safe to do so, with any resulting log debris being left on site to be used as habitat. 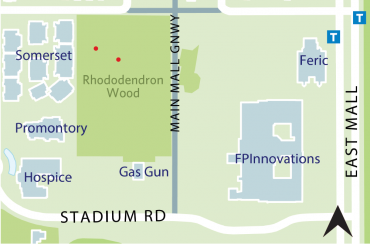 Two trees - one red alder (Alnus rubra) and one Douglas fir (Pseudotsuga menziesii) - along the edge of Pacific Spirit Park on the east side of Binning Road have died. The trees pose a potential risk to users of the pathway. The trees will be pruned or removed with the log debris being left as habitat. 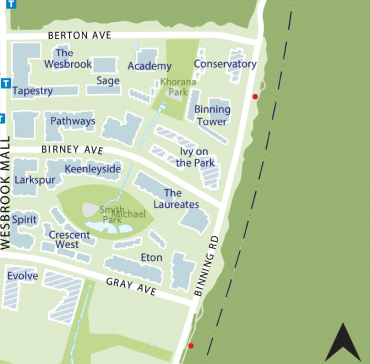 Six western cedars (Thuja plicata), two red alders (Alnus rubra), and one birch (Betula sp.) are dead, dying or in poor conditions. These trees pose a potential risk to users of the pathway. These trees will be removed with the resulting log debris being left on site to be used as habitat. 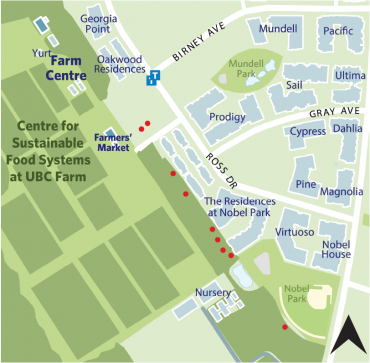 Three red maple (Acer rubrum) and a sweetgum tree (Liquidamber styraciflua) on the north side of Thunderbird Boulevard will be removed due to the construction of UBC’s renewable energy hub. The trees are located within the vehicle zone of the project’s hydrogen fueling station and on the site of a new underground sewer line. 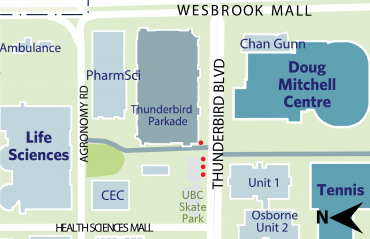 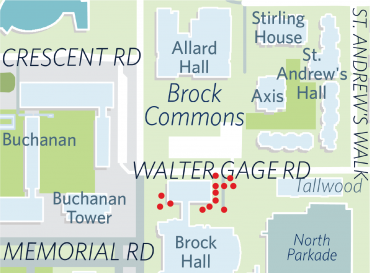 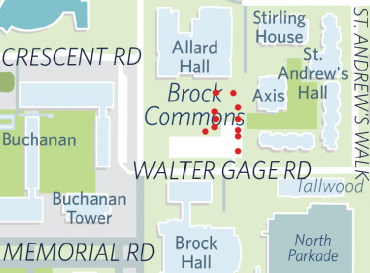 Two ash trees (Fraxinus sp.) on the north side of Walter Gage road are to be removed due to the upcoming road realignment project. The realignment is related to the ongoing construction of the Saltwater Residences (previously known as Pacific) and accompanying redesign of the public realm. Two magnolia trees (Magnolia sp.) will be transplanted and taken to the Building Operations Nursery in south campus. 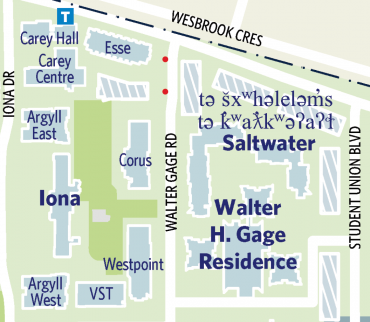 One sweet gum tree (Liriodendron tulipifera) that has died has been removed. 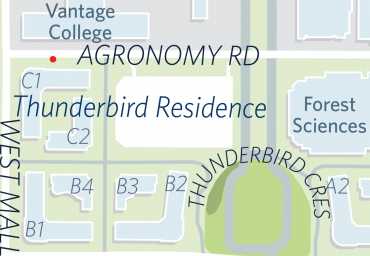 One weeping birch (Betula pendula) that has died from a bronze birch borer infestation and is dropping branches has been removed. 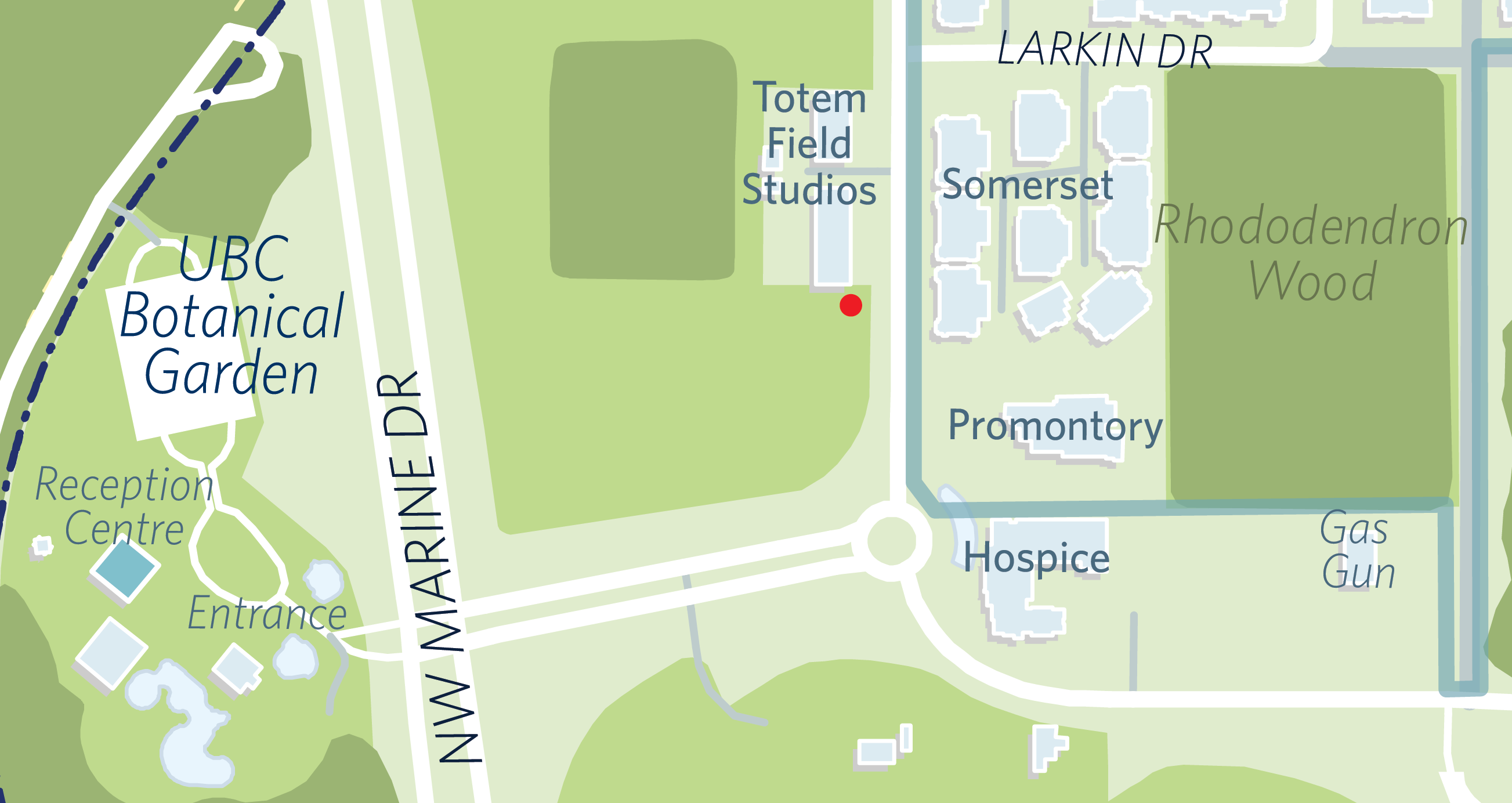 Four trees (1 x Japanese maple, 1 x red alder, 2 x bitter cherry) located next to the playground between Child Care Services Administrative Building and Acadia Daycare were removed as they posed a safety concern due to being dead/dying from age, drought, and fungus. 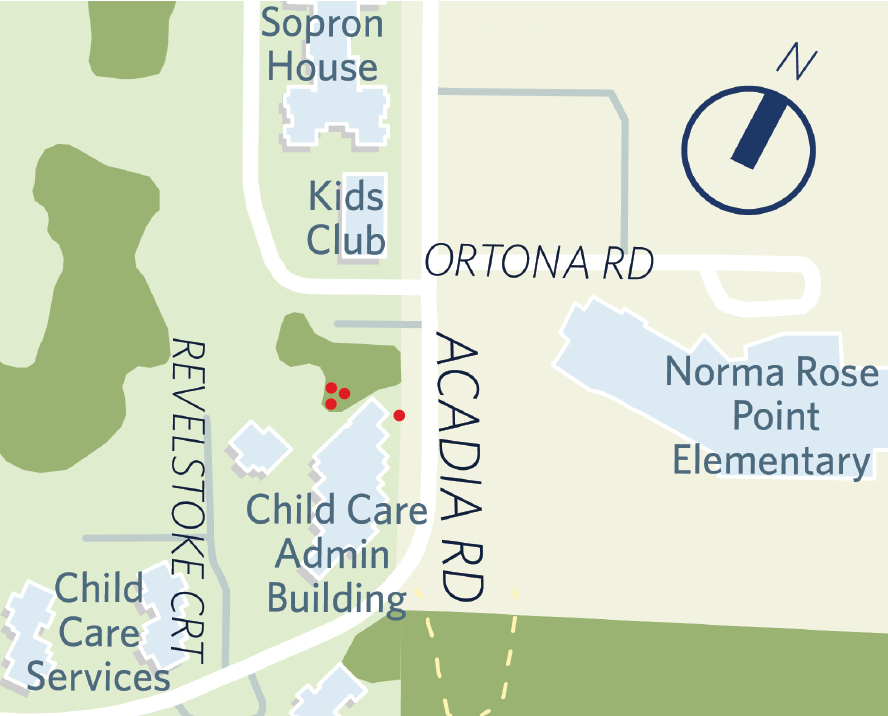 Three Himalayan birch (Betula jacquemontii) were removed from the east side of Sopron House due to safety concerns from dropping branches as the result of a bronze birch borer infestation. 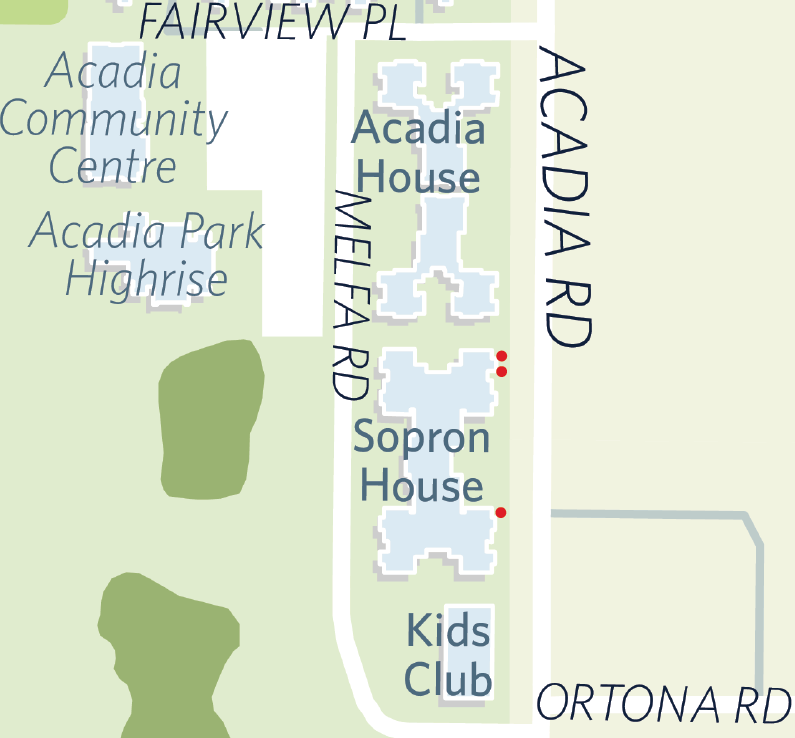 One maple and one spruce were removed from the northwest of the hospice site to accommodate a new air handling unit. The unit is required as part of a mechanical upgrade to the facility to improve occupant comfort. Additional plantings will be provided to maintain the privacy of the hospice. 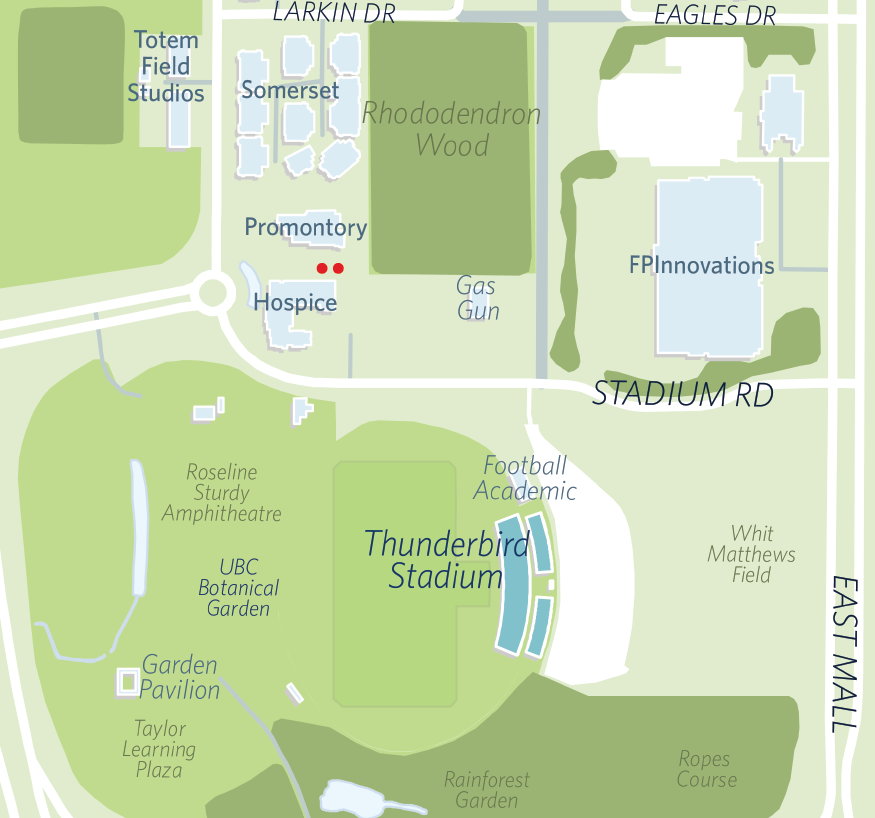 One maple (Acer sp.) was removed from the grove of trees adjacent to Acadia Park Lane, to the northwest of the Acadia modular daycares, due to conflicts with the expansion of water main service to the Acadia Park neighbourhood. 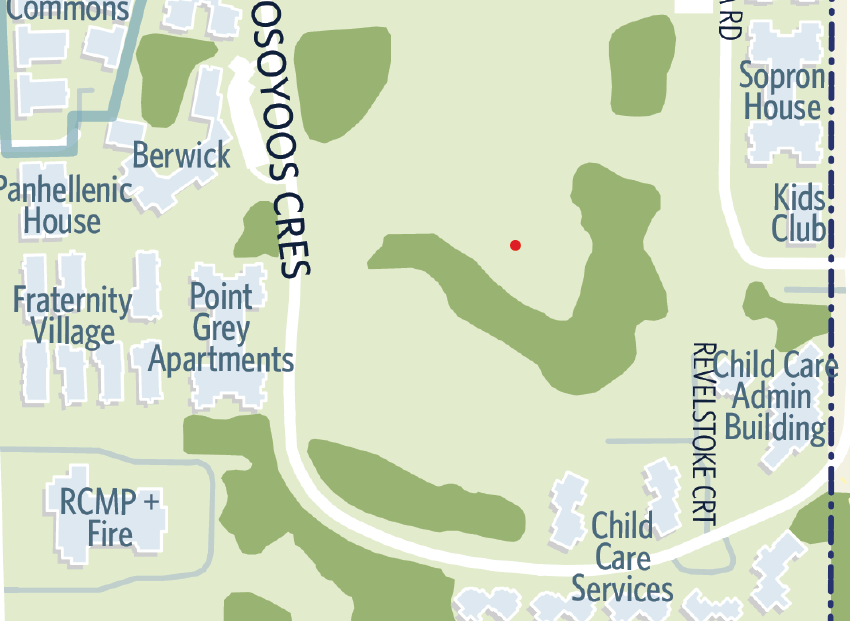 One black locust tree (R. pseudoacacia) will be removed from the northwest corner of Brock Hall. The tree conflicts with the expansion of the Destrict Energy System (DES), sanitary sewer, and stormwater utilities required service the future Arts Student Centre at East Mall and Water Gage Road.

As part of the neighbouring Brock Commons Phase 2 development, which includes the site of the Brock Hall Annex, new landscaping and trees will be planted. 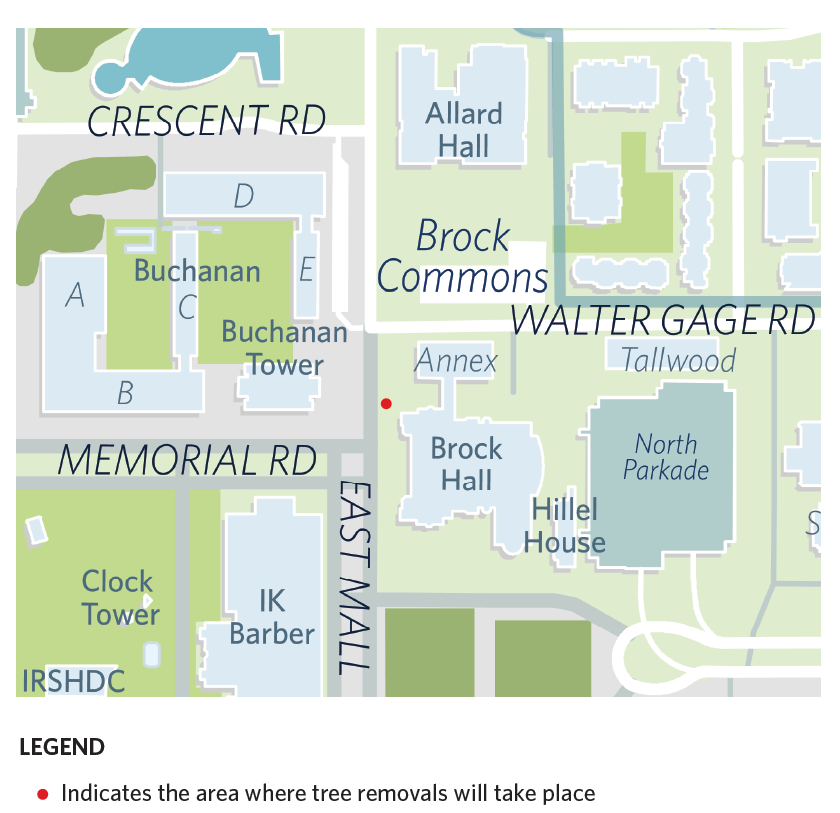 Seventeen Western hemlocks (Tsuga hertophylla) raning from 10 - 25 cm dbh were removed in late January/early February. Removal was required as twelve of the trees were dead and five were dying and unlikely to recover due to drought stress and root rot. Removal was needed as they posed a hazard to pedestrians and the Museum of Anthropology. 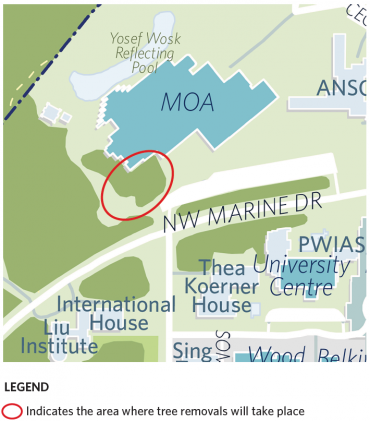 The trees are in conflict with the landscape features, structures, and road realignment forming the redesign for the courtyard. Trees have been retained and protected where possible and new trees will be planted as part of the larger Pacific Residence project. 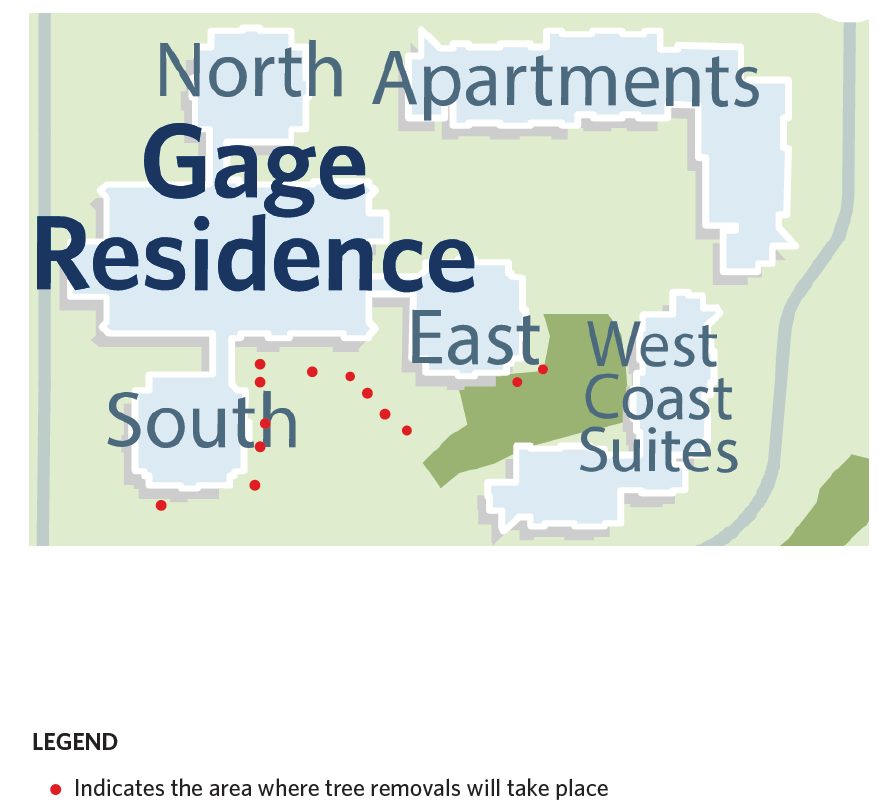